The most accessible app to invest in digital assets. 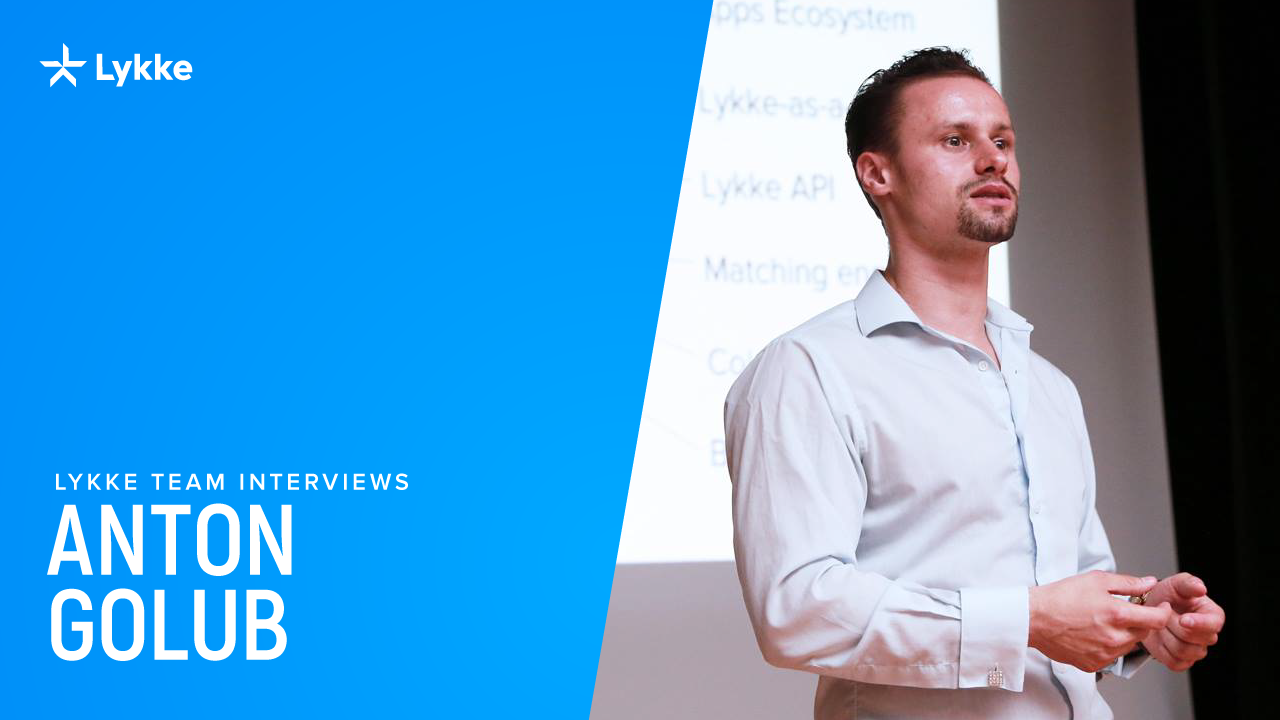 For this installment of the interviews with the Lykke Team, we have Anton Golub, Co-Founder and Chief Research Officer of Lykke. Anton was involved in several research projects funded by the European Union, including risk management and risk reporting, self-organized information processing, and criticality and emergence in multilevel systems. He is currently a supervisory board member for the BigDataFinance project. Anton has also coauthored eight research papers and two book chapters.

Hear from Anton his thoughts on the blockchain, the current state of finance, and of course, on Lykke.

Question: What is blockchain?

Anton: So, there are two answers to that, a long one and a short one. The short one is that blockchain will completely change the way we work and do things, and nobody will know about it. Just like today, if I ask you, “When you send an email what happens?”, I can actually bet that nobody, not only you, but nobody here knows what actually happens, but it works, and that's the most important thing. In the same aspect, the blockchain will change the world, the way we deal with value, and it will just work, and it will be amazingly fast and simple, intuitive, and everybody will be so happy. But if you ask in 10 years what actually happens underneath, they will say, "I don't know. There's just something there." Maybe they won't know the word "blockchain", but they will just say, "I don't know, it just works."

Question: How does it work?

Anton: Now, in technical terms, basically, what the blockchain is, is just a database. In simple terms, it's a database where you write stuff. Now, the reason why it's so interesting is because of the question "Who writes the stuff?" and “Can you trust it?” Now, the simple answer is that yes, there are entities that kind of check that what you write there is kind of in order, that there are no mistakes, in simple terms, and you can actually trust them. So, if another entity writes something and you look at it and say, "Should I trust it?" When it's on the blockchain, you actually have this element of trust among parties who don't know each other. So, for instance, if you and I hadn't met yesterday and talked a little bit, but if you did something on a blockchain and then I looked at it, I would say, "OK, I believe it. There's something there. I don't know what happens, but it works." So, this is basically the database where there are some entities, where people can write things, and some entities, who maintain this database and establish this trust between two people that actually have no common matter between each other.

Question: How is it revolutionizing finance?

Anton: To understand how it will revolutionize finance, first you have to know how it works now. And people will be completely shocked to hear that millions and billions and trillions are turned over every day in finance, the methodology and procedures that mandate how these values, assets and money are turned over are based on principles from the 60s and 70s. So, now let's go back to the 60s and 70s. That means, in the 60s, when you and I wanted to trade something, I would write a piece of paper, I would sign it, write in the description, and then take it to the post office, and then they would say, "OK, now we have to send it to you," and then you would read it, and then you would say, "OK, does this work?" You'd have to check things, and then, "It's OK, I believe this guy. There's something. Everything is right here." Then you would sign it and kind of have to go back. It's shocking that the same procedure is in place today. Like later you go to any bank. Of course, certain elements have been computerized, but the same procedure is in place today. It's shocking to know it. It's kind of unintuitive that we have instantaneous communication today. I have my cell phone here with me. I can communicate instantaneously, but all of a sudden, once you start dealing with money and assets and value, it takes ten days and it costs a lot of money and people have no clue what's going on. But there are very good reasons why it takes so many days, and why it costs so much money. The reason for that is because it's literally the whole so-called "settlement system," when you exchange assets, is still based on the same procedures from the 70s when you sent pieces of paper.

Anton: One aspect that can be solved by blockchain is the one related to technology. The set up is still based on the old principle. The blockchain will replace it and have a new and efficient infrastructure. That's nice, but what the blockchain will do in an intangible manner is that it will open the financial system to everyone. It will democratize it, so anyone will have access. And whatever you want to do, it will be very clear and simple and efficient. And if you want to have your project, to do your blockchain sci-fi movie, you can just say, "I want to have this project" -- you will announce it to the global network of individuals. People who like it will say, "Yeah, why not?" Maybe there's a person in Singapore and one in the US, in LA, some movie director, and then some person in the South Pole looking at your project and saying, "Yeah, I like this idea." And they will provide funds to realize your idea. So it would be complete democracy in finance, which is unbelievable today. Today, if you're not that guy with millions and the right network, you don't have access to anything. So you just open up the financial system to everyone, very simple, and then things will come out from that. You cannot even imagine and I cannot even predict now what will come in 5 to 10 years.

Question: What is Lykke?

Anton: So, first of all, Lykke is a company of a lot of nice people. But in my view, this is my personal opinion, Lykke is a vision of Richard. What I was describing now, I’ve heard many times, so a lot of the words that I'm saying now are not mine, but Richard's, I'm his ambassador. He always had this idea – let's completely change the financial system. And because he's so Swiss and so polite and nice, he would tell me, "Anton, we need to go to the banks and twist their arm so they will change." And, of course, that would never work. They would have a nice conversation, they would smile, they'd say, "You're so nice, everybody's so nice," they'd say, "the door is over there," and the status quo would continue. But always there was this dream, this vision, "Yeah let's change it completely. We know what we need to do, so let's just go and change it." I literally remember it. It was a rainy day in Geneva, and then Richard called me and these were his exact words. He said, "Anton, all the stuff that I've been terrorizing you for the last couple of years, with regards to how we need to save the planet, but first doing it by changing the financial system. We can do it, you know, and it's no problem. We can do it, and the funny thing is, the technology already exists." Then he said, "There's this thing called the blockchain," and I said, "Yeah, I’ve heard about it somewhere." And then he explained, that we need to have colored coins, we need to put real assets, not cryptocurrencies, and then we can do all the magic that you wanted to know. So, Lykke is just the continuation of his vision. I say "continuation," because this is not really a start. This is a long, long project, and I’ve heard the idea in different forms many, many times. It's just that we never had... it was not obvious that the solution was out there, that you just need to take it.

Question: How did you get involved?

Anton: So, I know Richard from a long time ago. When I met him – it was about 7 years ago – and literally the first day I met him, he started – so I will be politically incorrect – he started brainwashing me, and he did it in a very nice way, just to make it clear. He is very kind and very nice. He makes you feel good about yourself, like everyone at Lykke. He says, "You can succeed." You convince yourself that you can succeed. So, when I met him he started telling me about his ideas, how we needed to do it. It was a long process for me to start believing it, because when you hear an absurd idea about changing, saving the planet, it's a very funny thing to hear. But when you hear it for long enough, and if you hear it in a kind manner, then you believe it's possible. So this is really how it is. And when I met Richard early on, he said, "OK, you can join me," and then we moved together, and I'm now here, helping him save the planet.

What is a crypto-fiat gateway?

A fiat gateway is a combination of words that you will frequently hear if you decide to enter the cryptocurrency world and buy Bitcoin or other cryptocurrencies in a crypto app. To understand its meaning and function, you have to understand what fiat means. Fiat means simply conventional money, it refers to national currencies the government’s issue not backed by any commodity. It derives from the Latin word fiat (from “facere” - make/do, present passive subjunctive “let it be done”) and we can assume that it implies a deal - let it be done!

What is a Coin Burn?

As new tokens are mined and enter circulation every day, cryptocurrencies need to ensure that the market is not oversaturated with supply. After all, prices in the digital currency market are almost entirely dictated by the economic principle of supply and demand.

Reflection on the Journey

September 26th was a very significant day for us since we celebrated our 5th anniversary. With having some time to reflect on what has been done in our journey, we are more than grateful to all our customers, community members, investors, stakeholders, and friends who despite the ups and downs from the bumpy road, remain true to our dream.

The Evolution Of Fintech

The phrase Fintech which stands for ‘Financial Technology’ refers to software and other modern technology used by businesses that provide automated and streamlined financial services.

Best Cryptocurrency to Invest In, other than Bitcoin, if you are a beginner